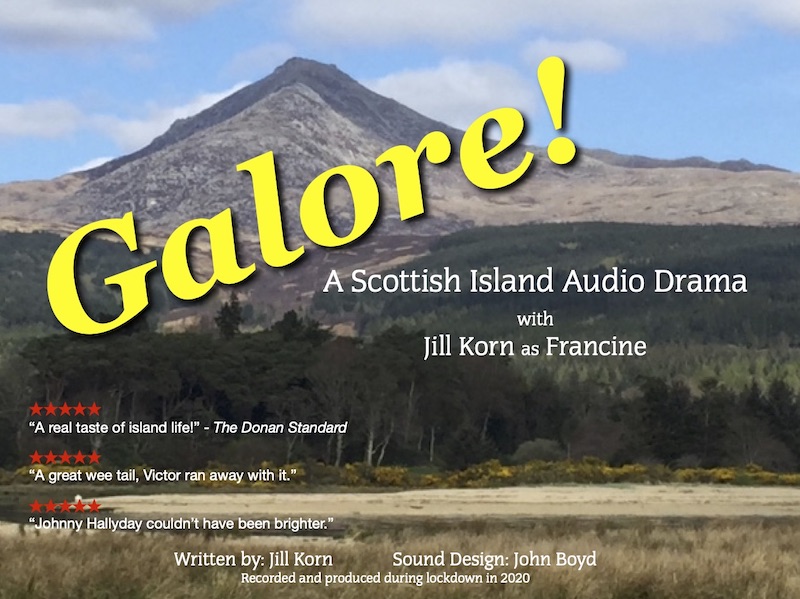 I collaborated with Jill Korn to produce Galore! an audio drama inspired by the events in Compton Mackenzie’s 1947 book, “Whisky Galore” and the film made two years later.

Galore! is an audio drama. Jill Korn wrote and performed the words, which is challenge enough. I am her “partner in crime” and provided the sound design. It’s been a sustained project to build immersive soundscapes that transport our listener to the hotels, shores and hillsides of the Isle of Donan.

Socially distanced working has been a challenge. Even so we’ve achieved an audio drama that just works. I’ve had such a great time making this audio drama there will be more.

LISTEN TO THE PLAY NOW.

“The making of a radio play or audio drama begins in a studio of some kind. There are mics, screens and all manner of technical stuff around which I don’t even begin to understand. There is a script, which I hope will work as I intended and there are actors who make it work better than I intended.  So far, so good. But the real magic has only worked if the listener is transported to an island seashore, a Parisian brothel or a medieval prison cell. That’s the job of the producer, my partner in crime. Making a radio play is pure  deception, and I love it.”