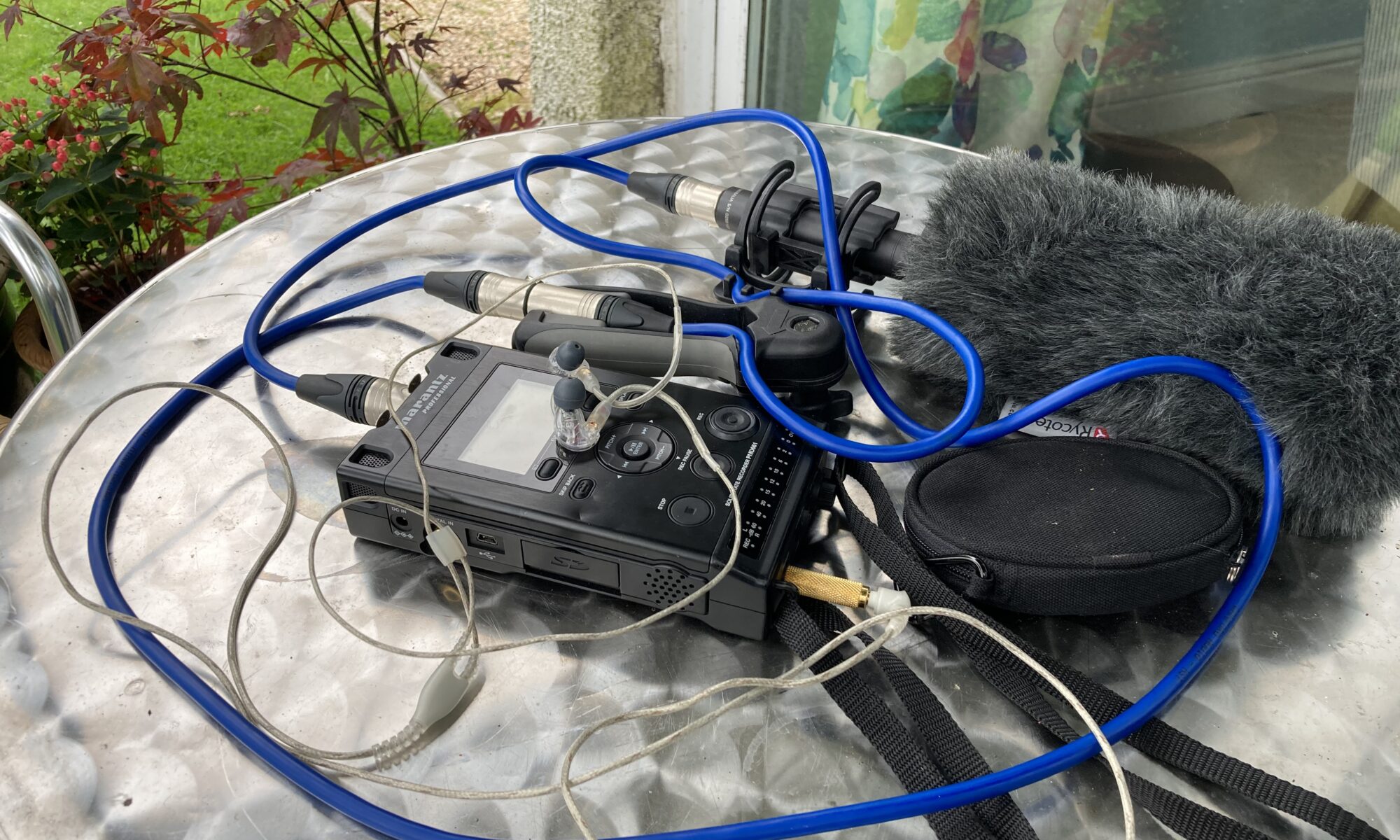 I prefer to use real sound effects in my audio. I’m working on an audio drama set on a Scottish island, so a ferry trip when I went back to visit friends on the Isle of Arran was too good a chance to miss recording its noises.  Although my listener may never concentrate on the background sounds in a piece of audio, it’s still important for them to be genuine.  The subliminal effect of hearing actual sounds makes the audio much more believable.

Recording in public places presents some legal niceties.  Not least of which is, what is a public place. Still, I work on the basis of being discrete and not offending anyone. Secret Squirrel, OK?

I make a clear distinction between ambient sounds and conversation.  Anything intelligible is out. Verboten. Interdit. I immediately delete the “tape” if I inadvertently record a distinctive voice or even a word that can be clearly understood.

All of this stuff is what they call “diegetic sound”; sound the characters in a drama can hear.  The sound effect has to be natural, which means you’ve always got to consider unusual sounds that stick out, and music from radios or PA systems, that might also be protected by copyright, by the way.  These make it more difficult to edit or loop an ambience because there’s a jump or the same bit keeps coming round.  The character wouldn’t hear it like that and it rips the listener clean out of their suspended disbelief.

To record a crowd is less easy than you’d think.  It’s difficult to be discrete with a full-on recording rig, so small is good.  The second anyone spots a recorder the reality of a scene disappears. And – questions are inevitable; “what are you doing. Is that a microphone?” The inexpensive option that begins with a “Z” wasn’t available when I started, so I still use my trusty old Marantz, which has perfectly functional, built-in stereo microphones.

Spot effects are often easier to record. But not always. I find there’s less chance of being interrupted, and thankfully, less need to be inconspicuous.  It can take quite some time to get the right sound, though.  Another sound can intrude and obscure the one I want – nearby road-works while trying to capture a pedestrian crossing sticks in my mind.  There’s always the option of moving to another place or picking a different time of day.  That’s something you learn by experience or, if you’re lucky, someone will put an arm round your shoulder and point out where you’ve gone wrong.

I’m fond of saying, my soundscapes are only to provide a framework that supports the narrative of the story.  I’m convinced that sound from the actual environment of the action works best, and there’s no need to pretend ambient sound is anything different.

The last recording I made before I moved to Perthshire was of Angus Adamson, a true Arranach, reflecting on his life spent on the Isle of Arran.  There are only two voices in the piece; Angus himself and the island. Over the years, I recorded all the sound effects on location on the Isle of Arran.  Lend a lug and decide for yourself if it works.